The Camp Fire project, executed by the SPSG joint venture team, comprised of Sukut Construction, working as a managing partner, Pacific States Environmental Contractors, and Goodfellow Bros. has been named a “Most Unique Safety Project” by the United Contractors Magazine.

The project, which began February 1, 2019, was one of a kind in regard to safety. Every aspect of the work and safety plan was different from typical construction. One of the reasons this project was so unique was the magnitude of the destruction caused by the Camp Fire. The fire burnt and destroyed over 153,000 acres. Additionally, because the SPSG crews had to mobilize quickly, all hazardous activity project analyses had to be newly developed in a short period of time.

Another element adding to the uniqueness of this project was the fact that it was a joint venture. The SPSG team worked hard to combine each of the three companies’ safety programs to create a successful safety program tailored to the project to ensure the desired outcome. Those who were new to the workforce went through an internal training program before beginning work. The agenda of this training included a detailed review of the specific hazards of debris removal, as well as general construction safety practices.

Safety requirements of this kind of nature of the project dictated for the Tyvek suits and respirators to be worn by the crews at all times, even in 100-degree weather, which was challenging on the bodies. This added to the project’s safety challenges and had to be taken care of properly under the safety protocols. Workers took necessary water breaks outside of “hot zones” to avoid heat strokes.

During the project, everyone on the team participated in daily safety meetings with training, risk talk, and near-miss reviews. Safe practices were implemented that allowed the debris to be sorted and delivered to its final disposal site at a rate that will set a precedent for future incidents. SPSG incentivized safety with rewards of BBQs and various gifts to the safest teams of the week.

By continually coordinating with the Client, its representatives, and everyone involved in the project, all while following the safe practices, the SPSG team successfully finished the project ahead of schedule. 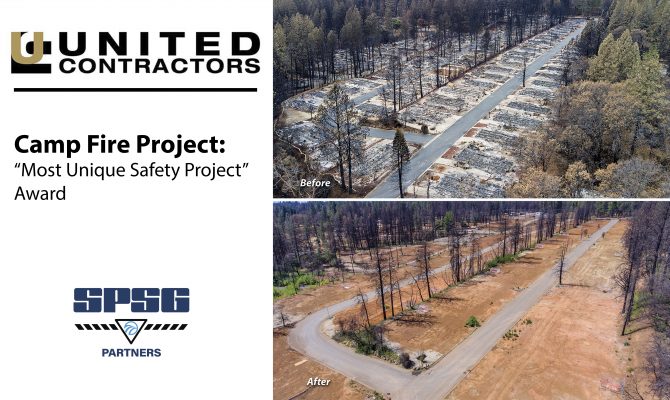