The Boys and Girls Clubs of Capistrano Valley, with branches in San Juan Capistrano, Aliso Viejo and Rancho Santa Margarita, are a world class after-school non-profit organization that offers quality programs to kids and teens. These life-enhancing programs promote the academic and social development of boys and girls by introducing a sense of competence, usefulness, belonging, and influence.  Daily after-school activities include initiatives that strive to establish and develop healthy and active lifestyles through fitness, recreation, and arts.  Last year, the organization served more than 2,300 members with the average daily attendance of 472.  Sukut is proud to be supporting this non-profit and is looking forward to many more years of collaboration to help guide kids into a safe future.

To learn more about The Boys and Girls Clubs of Capistrano Valley, visit their website https://www.bgccapo.com/

Sukut Construction is a General and Heavy Civil Engineering Contractor with 50 years of superior performance on residential, public, commercial and industrial projects throughout California.  In its history, Sukut has moved more than 1 billion cubic yards of earth and is considered as California’s leading grading and excavating company.  They own and maintain an equipment fleet of more than 300 units, and own one of only a few private fleets that are compliant with the 2010 Air Resources Board (CARB) rules for off-road diesel equipment.  Sukut has been nationally recognized for its work on a variety of projects.  These projects range from small to large and encompass general contracts for earthmoving, dam construction, roadways, major drainage structures, and civil works.  In recent years, Sukut has received more than 30 industry honors, including “Contractor of the Year” and “Best Company to Work For.” 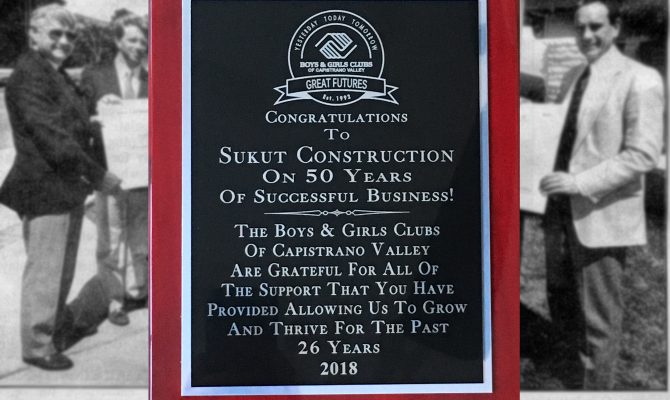