CalContractor Magazine highlighted Sukut’s Phases I and II of the Oasis In-Lieu Recharge project, the primary purpose of which is to provide more irrigation water to the surrounding communities from the Coachella Canal, in their March 2022 Underground Construction issue. As the existing water table was being depleted, the Coachella Valley Water District contracted Sukut in October 2019 to first construct a connection to the district’s canal distribution system as part of Phase I of the project. This work involved the construction of a 60-acre-foot concrete-lined reservoir and the installation of 2,835 linear feet of a 72-inch steel pipeline. Sukut also built an intricate bypass system and a reinforced concrete control structure that accommodated two 75HP vertical turbine pumps, motors, valves, and motor-actuated slide gates during the project. The work also included electrical conduit installation and surface restoration. Sukut completed this phase of the project in December of 2020.

The construction of the reservoirs and pump stations is projected to be completed at the end of summer 2022. As the crews are working along and making good progress, the Phase II of the project is currently ahead of schedule and is expected to be complete this Fall.

To read the full article, starting on page 12 of CalContractor magazine, visit LINK 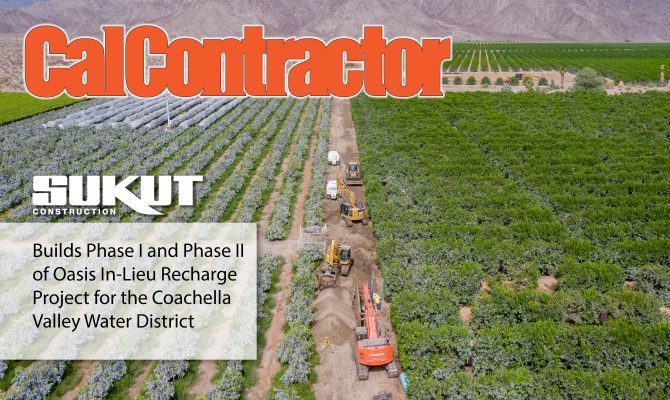