In its April 15, 2019 issue, “Paradise Lost?”, the ENR magazine covered a story of the wildfire that destroyed most of Paradise, Calif. and agencies involved in the cleanup efforts. The Camp Fire that began on November 8, 2018, is referred to as the deadliest and most destructive wildfire in California history to-date. It burnt through 153,000 acres, bringing down 19,000 structures, and taking 86 lives.

Following the disaster, in early February 2019, California’s Department of Resources Recycling and Recovery (CalRecycle) awarded a contract to SPSG Partners, a joint venture incorporated of Sukut Construction, Pacific States Environmental Contractors, and Goodfellow Bros. Sukut has been appointed as a Managing Partner.

After quick mobilization, the SPSG Partners’ staff has been working six days a week to remediate up to 75 lots daily. Over 1,000 laborers, operators, truckers, and other types of field staff, including Paradise residents, are working hard to remove 1.4 million tons of debris that consist of metals, concrete, ash, contaminated soil, and other material generated from the fire. The partnership’s goal is to help restore the area as quickly and efficiently as possible so that the residents can start re-building and getting back up on their feet. 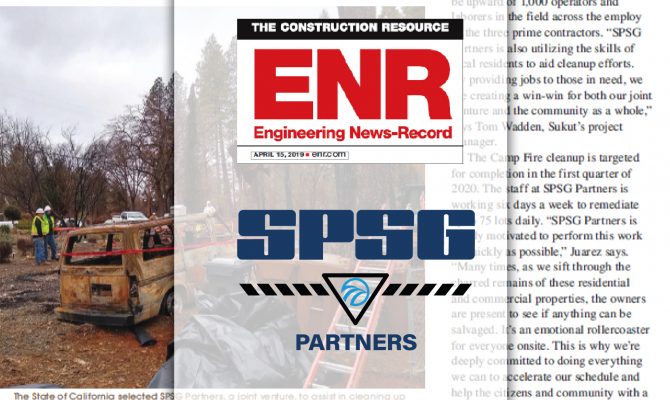