On October 9th, the Santa Margarita Water District held a dedication ceremony of the newly renovated Trampas Canyon Dam and Reservoir. It is now considered to be the largest recycled water reservoir in Orange County, California.

The ceremony marked a historical moment in the reservoir’s history that represented its readiness to serve residents of the surrounding area by providing more usable recycled water while minimizing the discharge of the used water into the ocean. Currently, the district uses 100% of its drinking water taken from the Colorado River and northern California. The renovated and enhanced Trampas Canyon Reservoir will help the district achieve its goal of collecting 30% of drinking water from the local sources. The new reservoir will also provide extra water during the drought season.

In 2017, the district contracted with Sukut Construction, LLC (Sukut) to complete the renovation and reconstruction of a 50-year old dam and reservoir into the newer and larger Trampas Canyon Dam and Reservoir. Sukut deployed the crews in January 2018, marking the beginning of the renovations. During the project, the original dam was de-graded and reconstructed 40 feet taller and over 150 feet wider than the old dam. Sukut accomplished this by excavating and placing more than 3.7 million cubic yards of zoned embankment material to buttress and re-build the new dam. The new 5,000 acre-foot capacity reservoir also required the import of 700,000 tons of granular filter drain materials and 100,000 tons of riprap and bedding along with a host of instrumentation and control support features. In addition to the reservoir enhancement work, the project also included the construction of a dam control building, dam electrical and instrumentation system, emergency outlet structure, a concrete spillway with 15-foot-tall walls, a boat launch ramp and stairs, boathouse, a microtunnel, MSE walls, tubing for the reservoir aeration system, new waterlines, and paving of the access roads.

The first few ceremonial drops of water were poured into the reservoir by the district and government officials at the October 9th ceremony. The reservoir is expected to start filling up at the end of this year and is estimated to be filled to its capacity of 1.6 billion gallons of water by October of next year.

Click on the video below to watch the Dedication Ceremony recorded by the Santa Margarita Water District. 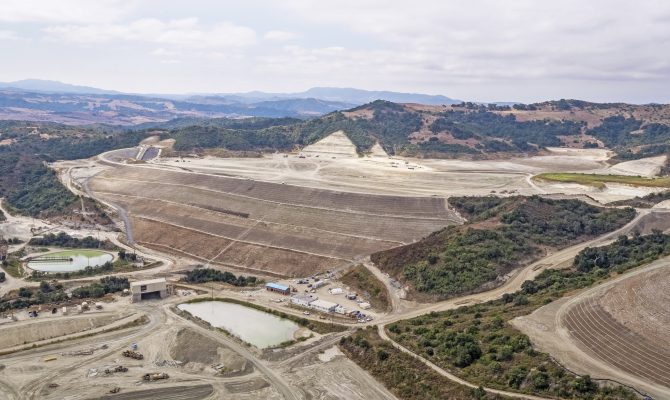