Sukut Celebrates 50th Anniversary and Reflects on Its History

Sukut Construction reached its 50th anniversary on October 24th, 2018, and celebrated this milestone a few days later, on November 1st at the Orange County Great Park in Irvine, Calif., inside Hangar 224.  They were joined by numerous clients, vendors, government officials, friends, and retired employees.

Myron Sukut, Founder, and Michael Crawford, CEO, took turns in thanking attendees for their significant additions to the company’s success.  Sergio Prince, Orange County Board of Supervisors Community Relations Advisor, Sen. Patricia Bates, and Assemblyman Bill Brough also spoke at the event.  They presented Sukut with resolutions and proclamations, congratulating the heavy civil general engineering contractor on 50 years of excellence and service as one of the industry leaders.  Former employees caught up with the current staff, and the venue flooded with old memories of how the Company started and grew into what it is today.

In the summer of 1967, a suggestion of starting their own business was made to Myron Sukut and Dick Coulson.  And in October of 1968, both men decided to take a leap of faith and started their own company, Sukut-Coulson, Inc.  At first, it was a two-man organization, that worked on small residential projects but the Company was awarded a public works job for the Los Angeles School District.  The rest is history, as the Sukut-Coulson took off and began to grow.

As the housing boom swept across the region at the beginning of the 1970’s, the Company grew even more.  However, after two years, Coulson decided to leave the Company.  In 1974 it was renamed Sukut Construction, Inc. and Sukut became the CEO and president.

In the 80’s, Sukut Construction moved into its current corporate office on Chandler Avenue in Santa Ana, Calif., and began its geographical expansion throughout the Western region by completing such large projects as the San Onofre Nuclear Generating Station, major sections of I-15 Freeway in the Inland Empire, Pelican Hill and Aviara golf courses, and hillside stabilization projects in La Jolla.

During the next decade, the Company received more than twenty industry awards for quality work and safety.  In 1994, Sukut branched out into a new type of work: installing storm drain pipelines at the 241/261 Toll Road project.  This venture separated Sukut from the majority of its competition as it allowed the Company to better manage project schedules and help drive more cost-effective solutions for Owners.

In 2000, Sukut was named the Contractor of the Year by the Southern California Contractors Association and one of the “Best Companies to Work for in 2000” by OC Metro magazine.  By 2002, Sukut had experienced exponential growth in revenues, and its staff had grown to 300.  The Company also began upgrading its equipment fleet with high-tech, computerized, emission-reducing engines.  In 2005, Sukut launched its Environmental Division that focuses on landfill construction, landfill closures, and environmental clean-up after natural disasters, such as fires.

In 2012, Sukut expanded into the Alternative Energy market by building solar and wind farms in the California deserts, as well as in Nevada and Virginia.  Sukut also welcomed another challenge: the Calaveras Dam Replacement joint venture project that has lasted for over seven years and is nearing completion.

Today, Sukut Construction is home to over 660 employees and is one of the biggest heavy civil general engineering contractors in the Western region.  They continue working on its strategic and organic plans to grow across the United States, diversify and provide an inspiring and challenging environment for its employees.

About Sukut:
Sukut Construction is a general and heavy civil general engineering contractor with 50 years of superior performance on residential, public, commercial, and industrial projects throughout California.  Sukut is most widely referred to as California’s largest mass excavation and grading contractor, moving up to 150 million cubic yards of earth per year and maintaining an equipment fleet of more than 300 pieces of heavy equipment.  In recent years, Sukut has received more than 30 industry honors, including Contractor of the Year and Best Company to Work For.  Sukut maintains its high status in the construction industry by offering the maximum level of project quality and safety, the very best in personnel, and cost-effective work. 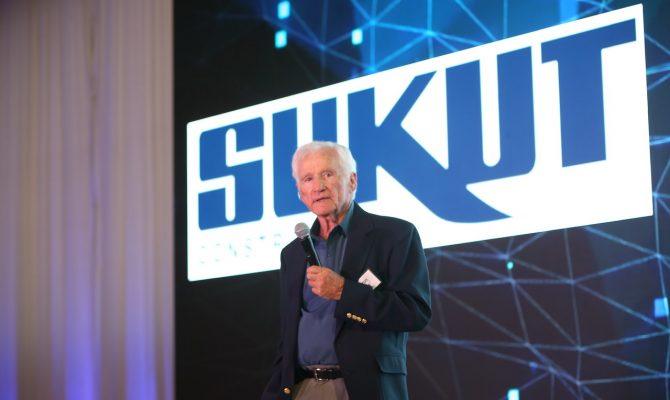