Sukut Construction is known throughout the construction industry as an innovator and leader because it attracts, develops, and retains the best people in the business.  This February Sukut attended the ASC Reno Competition in search of the new talent that would reinforce the Company’s industry status and contribute to the overall business growth. With Sukut’s presence at the competition increasing over the last few years, this time the Company had an impressive group of 11 representatives specifically to recruit talented students for Internships.  With the Company’s CEO, vice presidents, project managers, project engineers, and human resources present, students were able to speak with anyone to learn more about our company, the Internship Program, our growth, success, and reputation of promoting within.

Having such a diverse team of representatives at the event, allowed Sukut to demonstrate its belief in learning at all levels of the organization so individuals can achieve their maximum personal and professional potential.  New employees, whether they are hired for internships or full-time positions, are mentored by senior managers to gain a thorough understanding of the company’s propriety technology, processes, and systems.  This intensive team learning environment improves productivity and strengthens our competitive standing.  Through this training and development program, Sukut can leverage each employees’ unique strengths and provide endless opportunities for professional growth.

Sukut hires the best and the brightest and encourages everyone to contribute their new and innovative ideas.  This year’s career fair proved to be very successful, and so far Sukut has extended three job offers, with approximately 35 additional students that are in the process of interviewing.   The Company’s human resources team is thrilled at the positive response they are receiving from students, and there is a huge interest in working at Sukut.

Sukut Construction is a general and heavy civil engineering contractor with 50 years of superior performance on residential, public, commercial, and industrial projects throughout California. In its history, Sukut has moved more than one billion cubic yards of earth and is considered California’s leading grading and excavating company.  They own and maintain an equipment fleet of more than 300 units, and own one of only a few private fleets that are compliant with the 2010 Air Resources Board (CARB) rules for off-road diesel equipment.  Sukut has been nationally recognized for its work on a variety of projects.  These projects range from small to large and encompass general contracts for earthmoving, dam construction, roadways, major drainage structures, and civil works.  In recent years, Sukut has received more than 30 industry honors, including “Contractor of the Year” and “Best Company to Work For.” 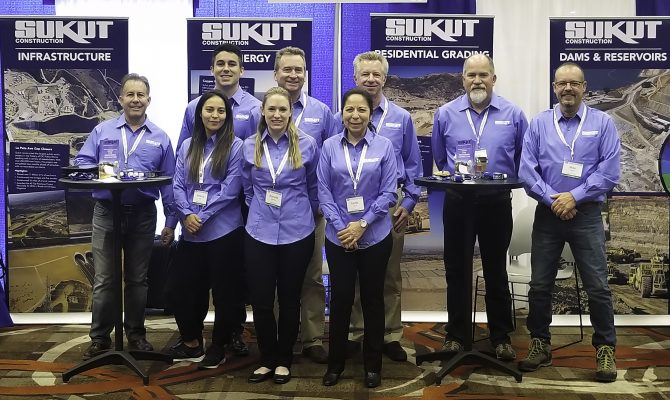