Sukut Construction LLC (Sukut) is considered to be one of the major heavy civil general engineering contractors in the Western Region.  To enhance this reputation, Sukut has also mastered underground pipe self-installation over the last 23 years.

Sukut began installing storm drain pipelines with self-perform crews in 1995 after the groundbreaking on the Eastern Corridor 241/261 Toll Road Project.  As the 241/261 Project wound down, Sukut sought to capitalize on the benefits of self-performing this type of work on other projects and also began to branch into other underground activities with the same crews.

Today, Sukut installs a wide variety of underground pipes, which generally range from 8 to 144 inches in diameter, and include RCP, DIP, PVC, fiberglass, steel, and HDPE.  To service a workload that has grown by over 325% in the past five years, Sukut has doubled the amount of wet utility install crews, and currently employs 15 teams of highly experienced installers.

In addition to utility piping installation, Sukut can self-perform all associated concrete work, including cast-in-place sewer line structures, such as those seen at the Spectrum 5 project at Serrano Creek in Irvine, CA.  Sukut also employs their own GPS services, which allows their team to track what they are doing and foresee any conflicts that can be fixed in real time. Because everything is self-performed, Sukut can better manage project schedules, help drive more cost-effective solutions for Owners, and save time while still providing an increased level of project control.  This integration allows communication to be more clear and time-effective.

Sukut Construction is a general and heavy civil engineering contractor with 50 years of superior performance on residential, public, commercial, and industrial projects throughout California. In its history, Sukut has moved more than 1 billion cubic yards of earth and is considered California’s leading grading and excavating company.  They own and maintain an equipment fleet of more than 300 units, and own one of only a few private fleets that are compliant with the 2010 Air Resources Board (CARB) rules for off-road diesel equipment.  Sukut has been nationally recognized for its work on a variety of projects.  These projects range from small to large and encompass general contracts for earthmoving, dam construction, roadways, major drainage structures, and civil works.  In recent years, Sukut has received more than 30 industry honors, including “Contractor of the Year” and “Best Company to Work For.” 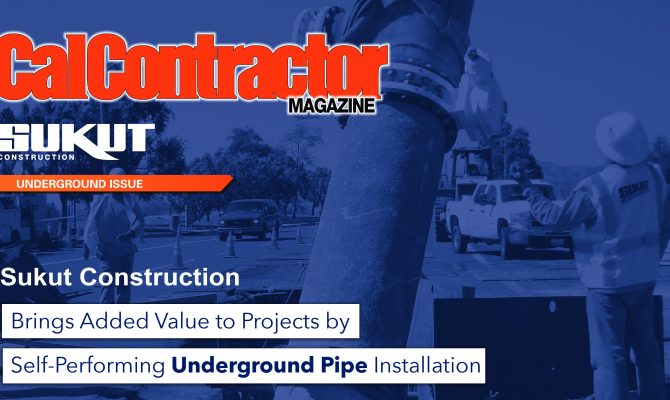