Sukut’s City of Industry Project On The Cover of CalContractor

Sukut’s Industry Business Center West Side Mass Grading Phase Two Project, located in the City of Industry, was featured in the December Grading and Excavation Issue of Cal Contractor’s magazine.  This project is the third consecutive job on this site for the same Owner, Successor Agency to the Industry-Urban Development Agency.  The work started in the spring of 2017 with the scheduled completion date in July of 2018.

This project entails grading 250 acres, excavation of native unstable soil, and replacing it with engineered, compacted fill.  Additionally, the scope includes the installation of a storm drain system, as well as the construction of a few structures.  Once finished, including the work performed in the two previous phases, Sukut will have moved a total of 21,540,000 cubic yards of earth, installed 29,000 linear feet of storm drain lines, and constructed 86,600 linear feet of a concrete drainage system.  According to Sukut’s project manager, Bryan Nesthus, due to the large size of the job, Sukut was able to put 4 spreads of Caterpillar equipment into one cut: three sets of push CATs with 651 scrapers along with a spread of 657 scrapers.  As a result, the team was able to achieve tremendous results, “Because of this, we saw some great production, where we have been consistently moving 100,000 cubic yards per day for months at a time.  I am very proud of our entire crew, including our two outstanding foremen, Brian Fahey and Edward Navarrete,” says Nesthus.

During the project, Sukut’s team was presented with the challenge of running into heavy rock material.  However, the necessary adjustments were made and Sukut was able to overcome the obstacles and is now looking at expediting the completion of the project.  Nesthus foresees this project to be completed at the beginning of the first quarter of next year.  That is 4-5 months ahead of schedule.  Such ability to solve problems, coming together as a team, and managing resources well, is very common for Sukut and its employees.

The full article about the project is available at: CalContractor December 2017 Issue

Sukut Construction is a General and Heavy Civil Engineering Contractor coming up on 50 years of superior performance on residential, public, commercial, and industrial projects throughout California. In its history, Sukut has moved more than 1 billion cubic yards of earth and is considered California’s leading grading and excavating company.  They own and maintain an equipment fleet of more than 300 units, and own one of only a few private fleets that are compliant with the 2010 Air Resources Board (CARB) rules for off-road diesel equipment.  Sukut has been nationally recognized for its work on a variety of projects.  These projects range from small to large and encompass general contracts for earthmoving, dam construction, roadways, major drainage structures, and civil works.  In recent years, Sukut has received more than 30 industry honors, including “Contractor of the Year” and “Best Company to Work For.” 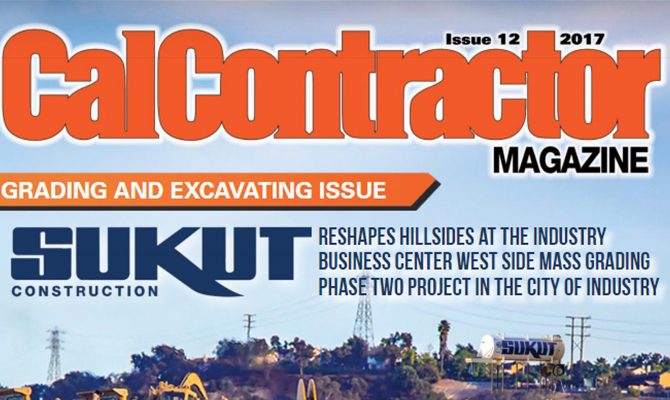