On Friday, July 17th of 2020, the SPSG partners gathered at the site of the destroyed Honey Run bridge to present a donation check to the Honey Run Covered Bridge Association. The donation of $225,000 will go towards rebuilding the bridge that was destroyed by the Camp Fire at the end of 2018.

The SPSG partners, composed of Sukut Construction, Pacific States Environmental Contractors, and Goodfellow Brothers, had previously cleaned up the city of Paradise, CA, following the fire and were excited to help restore the bridge.

Built by the American Bridge and Building Company of San Francisco in 1886, the Honey Run Bridge was first known as Carr Hill Bridge and stretched across the Butte Creek. It was deemed worthy of preservation for its historical significance in 1988 as it was found to be the only surviving example of a three-span timber Pratt-type covered bridge in the United States.

The group dedicated to the rebuild of the bridge has raised about $1 million and is working on collecting another $1.6 million needed to complete all three phases of the bridge’s reconstruction.

The bridge committee plans to begin construction next month and finish work at the end of summer in 2022. 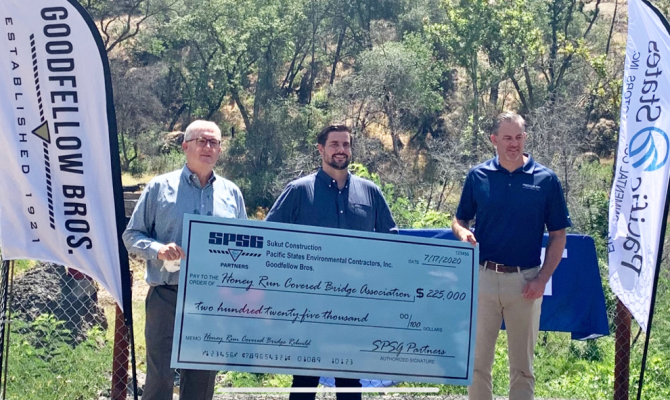