On December 4, 2017, the Thomas Fire originated in the area north of Santa Paula, and within a week, it reached Santa Barbara County near Divide Peak.  By the time it was extinguished on January 12, 2018, it had become the largest fire to ever hit the state of California.  The fire burned through 281,000 acres (440 square miles) and destroyed 1,063 structures.

At the beginning of 2018, Sukut was contracted by CalRecycle to perform the emergency cleanup of over 600 burned residential lots.  Sukut deployed 40 crews that occupied 140 trucks to work daily in different regions of the Ventura County.  Through a process of sorting the debris types on site (ash, metal, concrete, soil), the material was then wrapped in trucks and hauled to a safe disposal site at the local Toland Landfill, eliminating exposure of the community to hazardous materials.  Once the waste had been removed from each property, the soil was tested by a consultant before final erosion control was put into place.  At a peak pace of 80 completed homes per work week, Ventura County was able to move forward and rebuild in a safe, timely manner.

Cleanup efforts were also needed for two commercial apartment buildings that were among the structures that burned.  One of the properties consisted of a six-story, 20-unit structure which had only partially burned.  There were nine remaining units which were either untouched or were only partially damaged.  Rather than deem the building unsafe and simply demolish the remaining units that contained people’s personal belongings, Sukut set out to recover these items and return them to the owners.  To accomplish this goal, a structural engineer was brought in to assess the safety of entering the building and a detailed plan was devised to send crews into each apartment.  A long reach excavator was used to remove unsafe portions of the building prior to entry.  Over the course of several days, the crews met with each homeowner and consulted on where their personal belongings would be in the building.  Wearing full hazmat PPE, workers brought out those items and returned them to owners prior to demolition.

A project of this nature and size comes with its own set of unique challenges.  Based on acreage, the Thomas Fire is the largest debris removal project managed to date by CalRecycle.  Sukut’s number one priority was the safety of the community and its employees.  Crews often worked to remove hazardous material within feet of existing homes and families.  Over 140 trucks were needed daily to transport material on the same roads shared by the rest of the community.  “It was critical that Sukut worked with the homeowners, consultants, clients, and county to pre-task plan each site to find the safest and quickest method of removal without impact,” said Tom Wadden, Sukut’s Project Manager on the project.  Many properties were remote and required special temporary bridges to allow access for excavators and trucks for transport without disturbing the native ground.

All workers were required to be OSHA 40 Hour trained and wear full hazmat personal protective equipment (PPE).  “It was imperative that all staff on hand were properly trained, medically examined, and provided with the best PPE materials on the market,” said Tom Wadden.  With so many sites being very remote, it was key to have trucks equipped with spare Tyvek suits, gloves, glasses, chainsaw chaps, and other items to ensure that every worker had fresh and adequate safety gear throughout the entirety of each day.  There were many occasions when workers used up to four Tyvek suits in a single shift.  Debriefing at the end of each day allowed Sukut to assess area specific hazards and remedy them right away.

After safety, production was crucial for this project.  It was imperative that each site was cleaned as quickly as impossible to limit the impact to the community and the individual homeowners.  With an expected timeline of two days per home, Sukut was faced with a challenge when actual quantities began to grow beyond what was initially anticipated.  Homes in the area had much larger foundations than expected which meant removal duration could increase dramatically.  Trucking coordination went into full effect to ensure the material was being hauled away at the most efficient rate possible.  At peak efficiency, over 5,000 tons were moved a day.  This meant less time spent working among active neighborhoods and a quicker turn around for owners to rebuild.  Great care was taken with each site.  Crews raked lots completely clean, leaving no foreign objects, big or small, that could pose a threat during the rebuilding process.

As an unprecedented environmental project, innovation and flexibility were critical, especially in the areas of health, safety, and productivity. Deploying personal and community air monitoring, implementing dust control measures, systematically wrapping materials in trucks: all meant the project could be completed with as minimal risk as possible to the community and workers.  “Removing the devastation from the community so quickly after the event means the community can move forward and begin to rebuild.  We are very proud to have been able to help restore this beautiful area and give people an opportunity to start returning back to their lives,” said Wadden.

Upon the project completion, Sukut and the entire project team were recognized by the Ventura City Council on May 14, 2018.

To document the positive input that Sukut had on the area and community devastated by Thomas Fire, United Contractors Magazine published an article in its August 2018 edition.  The article is available here: https://issuu.com/unitedcontractors/docs/uconmagazine_august2018/52

About Sukut:
Sukut Construction is a general heavy civil engineering contractor with 50 years of superior performance on residential, public, commercial and industrial projects throughout California.  Sukut is most widely referred to as California’s largest mass excavation and grading contractor, moving up to 150 million cubic yards of earth per year and maintaining an equipment fleet of more than 300 pieces of heavy equipment.  In recent years, Sukut has received more than 30 industry honors, including Contractor of the Year and Best Company to Work For.  Sukut maintains its high status in the construction industry by offering the maximum level of project quality and safety, the very best in personnel, and cost-effective work. 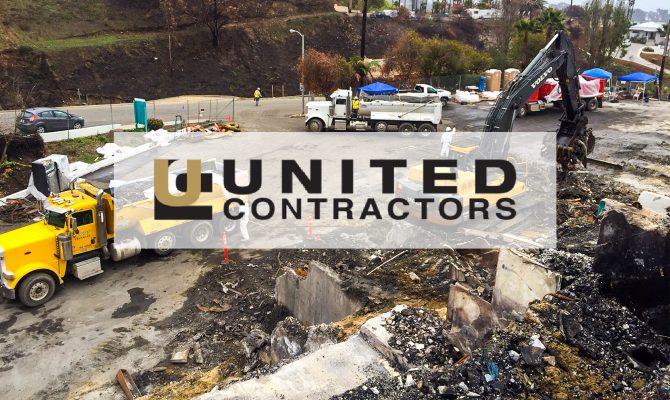